You know that, when you do nice things for other people, nice things are supposed to happen to you?

My neighbour asked the other day whether she might be able to use my wireless broadband signal. She really needed it for work but because they live in an old post office, where the telephone exchange used to be, they can’t get it, for some reason. She said her engineer had found a strong signal, which they assumed was mine. She said she wouldn’t ask unless she really needed it and she offered to contribute to the cost.

Of course I said not to worry about money, as I pay for it anyway and it’s not like it would cost me more, but that I’d never been able to get it to work. I spent about an hour on the phone to my provider the other week, and even he couldn’t understand why it would only connect through the cable. I assumed it was my slightly budget laptop and that I just wouldn’t be able to get wireless.

I told her the password anyway but then, when I saw her at the weekend, she said it worked. I thought it was worth my trying mine again – and that worked too!

She was still offering to pay but I said that if she hadn’t asked, I wouldn’t have it either so it’s a win-win 🙂

And if that wasn’t enough, when I saw her today, she gave me this: 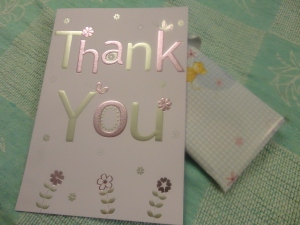 A lovely thank you card and, in the parcel, this: 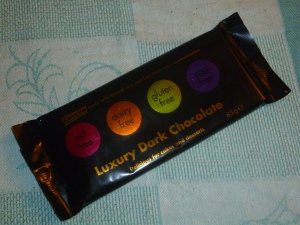 What a lovely thing to do, especially as she knows about my coeliac disease (and that I’m not averse to chocolate) so she made sure I could have it 🙂

And speaking of which, go on, tell me your favourite type of chocolate ever!

16 Responses to Karma and chocolate