Posted on June 7, 2011 by fromthehorse'smouth

As Nietzsche once said, “any day is made better if there’s a big chunk of cake involved.”

That particular quote has been mistranslated in the past, I believe, but that’s definitely what he meant to say 🙂

And to be fair, if you offered Friedrich a piece of this, I’d like to think he wouldn’t turn it down…

It was a friend’s birthday at work today and, for once, I’d got organised enough to make the cake at the weekend, instead of having to do it at silly o’clock last night. I wanted something a bit different and as I’ve had success with ground almonds and whipped egg whites before, I went down that route…

If the hazelnuts still have skins on, toast them at 160C for 10-15 minutes, taking care they don’t burn, then, when cool, rub off the skins with a tea towel. Then grind to a fine powder. Mix in the baking powder and set aside.

Whisk the egg whites in a large bowl to stiff peaks. In a separate bowl, whisk yolks and sugar till they’re pale and creamy. Fold the whites in three goes into the yolks, then fold in the nuts and baking powder. Divide between the two tins, level the tops and bake for 20 minutes, until the cakes are starting to come away from the edges. Leave to cool in the tins.

I iced them with Alisa’s whipped berry topping, which is definitely up there for the “best filling/icing ever” award, according to the judging panel (me) 🙂 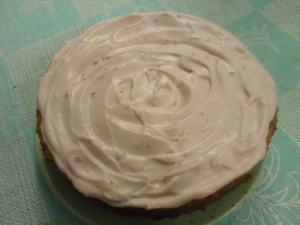 I also forgot to get pictures of it sliced but it went pretty quickly! I loved the fact I overheard one girl from advertising, who’s recently been diagnosed lactose intolerant, saying she couldn’t have any – and telling her she could; she was so pleased. I also love cakes like these, that aren’t defined by the allergens they don’t contain – it’s gluten and dairy-free and has no “bad” fat in it but it’s still one that anyone would make that wasn’t fussed about any of that, and still enjoy it.

I also loved the fact it tasted great! The sponge was really light and (sorry) moist and such a lovely hazelnut flavour, which went perfectly with the raspberry/coconut icing. And it did make today (when two front page stories fell through, a couple of hours before deadline!) a bit better. 🙂

I’ve submitted it to this week’s Slightly Indulgent Tuesday, at Simply Sugar and Gluten Free – and if you haven’t seen Amy’s blog, it’s great 🙂

I also want to say thank you to Jemma, for organising her bloggers’ swap at Celery and Cupcakes – very excited about choosing what to send, thank you Jemma!