Posted on June 4, 2011 by fromthehorse'smouth

As I was putting one of the horses’ rugs on yesterday, a gust of wind caught it and whipped it back in my face.

I suppose that, given the relative sizes of the rug and the metal clip on it, it’s actually quite impressive that whenever this sort of thing happens, the (small but heavy) clip manages to smack you right on the side of the head. But I wouldn’t exactly say I was impressed…

I could use that as a springboard to a rant about the nastiness of this wind, that we’ve been curse with just about every day since Easter Monday – but I won’t 🙂

The evening improved, by my meeting my best friend for a couple of drinks afterwards. Then, this morning, I woke up to find a parcel was waiting for me: 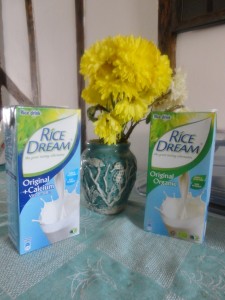 A lovely lady called Niamh had emailed me a couple of weeks ago, asking whether I’d like to try, and review, some Rice Dream milk.

Never one to turn down free stuff, I said I’d think about it… 🙂

I haven’t tried them yet but I will review them once I do.

Other good things about today were these… 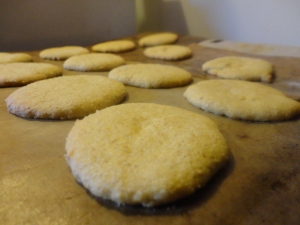 I don’t know why I’m so into my biscuits at the moment but what I do know is, if you’ve got coeliac disease and keep buying the GF ones,  you’re going to get poorer, quickly.

Lindsay also asked, on my last post, whether the Trufree digestives were available in America. I still had their website open so I sent them a message and they said no.

So in those cases, ya just gotta do it yourself. I looked up a few different brands and they all seemed to use wholegrain flour, some also used oats or oatmeal, and not that much sugar. I’ve had some luck with polenta making crunchy biscuits in the past sooooo:

Mix the dry ingredients together with a spoon, then add the margarine or butter and rub in (or mix in a food processor) till the dough looks like fine breadcrumbs. Add the yolk and mix together then form into a ball, wrap in cling film and chill for half an hour.

Preheat oven to 180C and line a baking sheet. Roll the dough out thinly between two sheets of baking paper or silicone and get cutting out 🙂

Bake in the middle of the oven for 10-12 minutes, until golden. 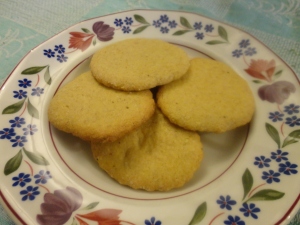 They’re not bad! Not exactly like the  original of course – but then I haven’t got the patience to carve “digestive” into each biscuit…

The flavour’s pretty close – and the polenta gives them that lovely crunchiness; always good in a biscuit, I reckon.

Apparently, these biscuits got their name because people originally thought they’d help your digestion. And although I can’t say these actually help, with the buckwheat, polenta and oat bran, and relatively small amount of sugar, they probably won’t hurt nearly as much as some biscuits.

And, more to the point, they won’t hurt my wallet nearly as much either 🙂