Coming to you this summerrrrr

Posted on April 19, 2011 by fromthehorse'smouth

I’m sure it’s possible to do audio posts. But as I haven’t got a Danny how to, I’d like everyone please (pay attention at the back) to imagine the above title spoken by that ever-present film trailer bloke.

You know the American bloke with the husky, over-dramatic voice who says his Rs in a weird way? That’s the one.

His next line would be: “Three newspapers. Three reporters… Three days.”

It’s got “box office smash hit” written all over it.

This week was always going to be manic and it’s proved just that so far. We’re short-staffed at the moment, because one reporter’s temporarily working for our sister paper, and the editor’s been off since Thursday. When he’s off I do his job as well as much of mine. And because of the double Easter bank holiday, the three of us have got to get the next paper, all three editions, done in a three-day week so – ya get the picture!

Yesterday was even busy in the evening because it was one reporter’s birthday today. I knew it was the 19th but just hadn’t managed to put the date and day together so we only cottoned on when he mentioned it yesterday. We got a collection together and a present but as everyone always has a birthday cake too… 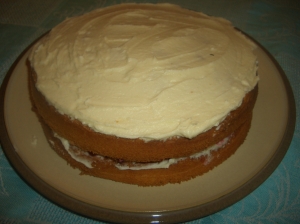 Luckily, this bloke’s all-time favourite, which he loves so much he’s bought the ingredients for before and asked me to make him, is a plain Victoria sandwich, which has to be the simplest cake ever.

It’s just 6oz flour, 6oz softened butter, 6oz caster sugar, three eggs and 1tsp each of vanilla and baking powder, all chucked in one bowl, mixed to within an inch of their lives and baked for 20 minutes at 180C.

I’d never mess with his favourite by making a GF version so I just use “normal” self-raising flour. I filled it with raspberry jam and vanilla buttercream, for which I just mix 3oz butter, with a splash each of vanilla and hot water, and 6oz icing sugar.

That’s when I realised I didn’t have enough icing sugar. It was 8pm and I didn’t want to get any but, I was sure I’d read somewhere it was possible, I took the right amount of caster sugar and ground it in my trusty mill, which took this: 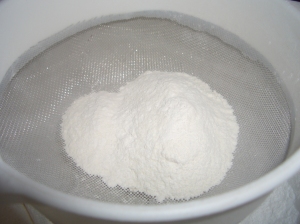 I’d thought the consistency would be close but never expected it to turn white! But it worked a treat: 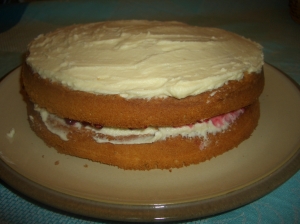 Got to bed at about midnight, then had a MAD deadline day today. But the cake went down a treat 🙂

And, however stressful work was,  it was 22C at 6pm (woop!) when I got home. I cycled to the yard, where it was beautiful; really peaceful and sunny. That and the exercise really made everything better!

Two things though, one is that if you’re starting to make a cake at gone 7pm and you’ve also got to cook dinner, make lunch and breakfast, wash your hair – and breathe, don’t do too much multi-tasking. Trying to ice said cake while cooking dinner might just mean said dinner is a little bit, er, crispier than you intended.

Not that I’d know, of course…

And also, on the multi-tasking front, it’s not the case at all that said hairwashing took place while said cake was in the oven, resulting in it staying in longer than it should have and rising in very strange places… that was deliberate. After all, dahling, the evenly-risen look is sooo last season! This season’s baking is all about bulges…

Has anyone else made special plans for Easter? Are you planning to watch the royal wedding?

22 Responses to Coming to you this summerrrrr