Posted on March 20, 2011 by fromthehorse'smouth

Thank you for the comments on the healthy cereal theme, yesterday. Maria had it right when she said most cereals’ “healthy” claims are due to the fact they’re low fat… but then, Mr Kellogg, so’s this: 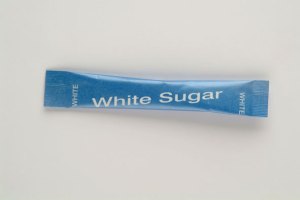 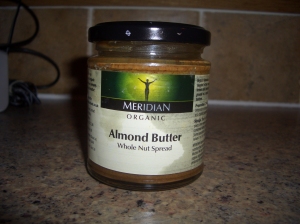 But if a healthy breakfast had to contain one or t’other, I know which it would be 🙂

And one of them featured in my breakfast this morning…

When I wanted pancakes, I used to look for a recipe and pretty much follow it.

These days, I just go for the highly scientific “throw things together, chuck ’em in a pan and see what happens” method of making pancakes. Sometimes it works… 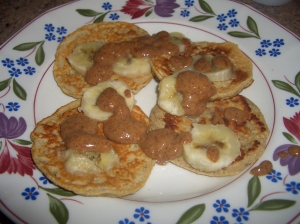 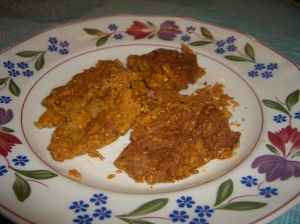 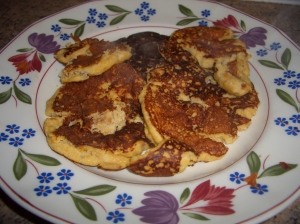 I wanted to try almond meal/flour pancakes but also, on my using things up theme, wanted to include the bargain peaches I bought a few days ago – so I combined the two.

Mix really well together and put dollops on your pan. The key to this sort of pancake is definitely a combination of keeping the heat really low and not trying to move them at all until the bottom’s properly cooked and set. Don’t try to flip until you can get the spatula under and move them and they hold together…

Even so, I got a bit too cocky and wasn’t careful enough as I flipped the last one and it broke. But it still tasted good, especially with almond butter/jam sauce on top: 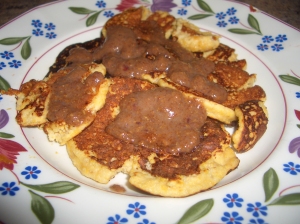 Delicious; I love the flavour the ground almonds give the pancakes and it really worked with the peach.

I should have spread them with something I made yesterday: 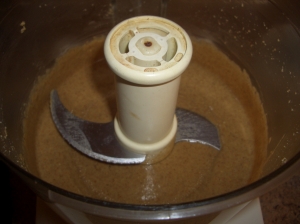 I toasted the pecans first to bring out the flavour and then let the Magimix do its thang (loving that food processor’s work!)

I love this but I think that, as pecans and chocolate are a match made in heaven, I might need to melt some dark chocolate into it… 🙂

I had a great dinner too. Katie’s brilliant mushroom stroganoff, which I’d had bookmarked for ages. I had it last night and it was so good, I made it again today. But I made twice as much, so I can have it tomorrow as well.

That might sound like too much of a good thing – but if you’ve tried this recipe, you’ll know it’s not  🙂 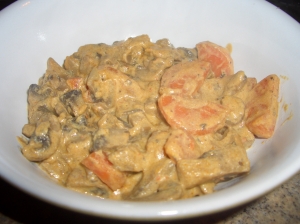 I added some nutritional yeast and used my favourite, class A-addictive red pesto instead of the tomato puree. And I’d like to take a moment here in reverence to the amazingness that is this stuff…. 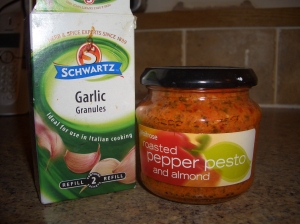 Pictured with garlic because, like the garlic, I seem to add it to everything I cook and it not only goes, it always enhances it. I say everything I cook and I do mean everything savoury and dinnerlike… but it’s that good, if you were to offer me, say, a piece of pesto chocolate cake, I might not turn you down straight away… 🙂

What are your staple “add them to anything and they’ll taste good” failsafes?