Posted on December 11, 2010 by fromthehorse'smouth

But it was 8C at one point today and after what we’ve had recently, that’s as good as bikini weather! It also meant I got to ride Dave, as the school had finally thawed. He gave me a “what the *%£* is that?!” look when I brought his saddle out; he’d probably forgotten what it looked like.

I also met one of my best friends today, who I haven’t seen for ages, which was great.

But I promised yesterday to explain these: 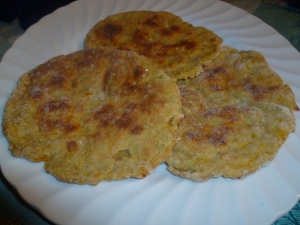 As I was saying yesterday, I added some oil to my wraps, which made all the difference (in that a) I could actually roll them out and b) I wasn’t still picking bits of dried dough off my wrists hours later)

Something else I love but haven’t made for ages because of the same handling problems, is pitta breads but the lightbulb moment applied to them too, resulting in….. butternut pittas!

Sieve the dry ingredients over the top, add the water and mix well, really squidging it together with your hands. Form a ball and leave for a few minutes.

Flour a surface, divide the ball into smaller pieces (I made nine) and flatten them into pitta-ish shapes. I don’t bother with a rolling pin, just use my hands, but turn it a couple of times so it doesn’t stick.

Put the pittas on lined baking sheets and leave, covered, in a warm place for an hour. Then, preheat oven to 200C, sprinkle the tray and pittas with water and bake for about 12 minutes. Keep an eye on them to make sure they don’t over-bake and, if you’re sad like me, become transfixed by the sight of them rising and puffing up like balloons in front of your eyes 🙂

These are best split while they’re still fairly hot, as it’s easier. 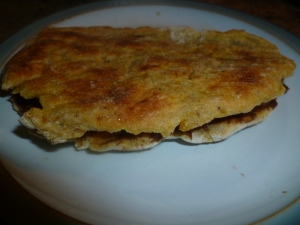 I had one toasted for breakfast this morning. I was going to make another weird banana bake but couldn’t be bothered! So I sliced one to put in, with some pb, instead.

So much better than the over-priced GF pittas you can buy in the shops! And so much easier to make with the oil added…

I also realised, thanks to Carrie’s comment yesterday, I hadn’t said how to make the banana pancakes. It’s so easy, just take half a banana, mash it to liquid and mix (really) well with 2tbsp egg white. Heat a large frying pan till water dripped on really sizzles, then turn down heat a bit and dollop in the batter. Wait until they’ve firmed a bit before you try and turn them over and watch they don’t burn! These quantities make three 2-3 inch pancakes.

You can also take exactly the same batter, pour it into a lined omelette pan and bake at 180C for about 15 minutes. 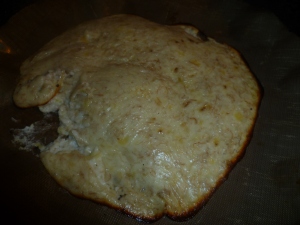 Dropping a camera, or any electronic equipment of choice, in the pancake is entirely optional 😉

10 Responses to It’s summer… kind of!