The eagle has landed…

Posted on November 30, 2010 by fromthehorse'smouth

… or, to be completely accurate, the snow has landed 😦

I know that picture’s not impressive but it was all I had time for at the yard this morning… and there’s going to be lots of time to take more because this stuff ain’t going anywhere fast! There was about five times as much when I got back this evening, after a nasty and much longer than usual drive home. Not good…

The silver lining to the (snow) cloud is, we didn’t get it yesterday. I had another late council meeting after work and didn’t get home till 11pm and that’s not a drive I’d have wanted on the roads as they are today. Plus, we’ve only got a dusting compared to the north of England and Scotland – 10 FEET!

And yesterday had started so well, with a breakfast inspired by Chelsey’s baked French toast. 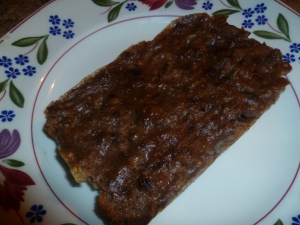 I used two slices of banana bread (they’re only small so I’d imagine one slice of “normal” bread would do) soaked in 90ml milk with 1tbsp egg white and 1/2 tsp vanilla. I baked at 175C, covered with foil, for 30 minutes, then took it out, spread half a mashed banana, mixed with almond butter, on the top and put it back in the oven uncovered.

15 minutes later, I took it out and, amazingly, managed to wait till the next morning to top it with vanilla yoghurt, dried banana, raisins and a sprinkle of granola. If you’re not a fan of bananas, it’s probably fair to say this triple-dose breakfast wouldn’t be up your street… 🙂 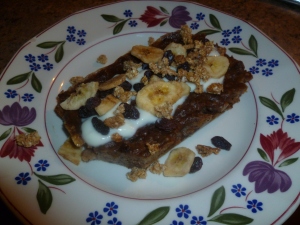 But it was mine! Lots of lovely baked banana bread/cake breakfasts to come methinks…

Have you got snow? Do you love it or hate it??

5 Responses to The eagle has landed…