Posted on November 22, 2010 by fromthehorse'smouth

It may be Random Monday… but that’s not an entirely random picture… but on to the banana bread in a minute. First, randomness!

The good-but-random aspect of my day is that the meeting I thought I had to go to this evening wasn’t on. Turns out, it never was… it’s next Monday! So although I’ve still got that, er, pleasure to look forward to, it meant I got home much earlier than planned AND I wasn’t standing outside the town hall like an eejit at 7pm wondering where everyone was   🙂 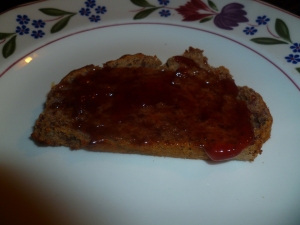 The bad-but-random bit was the fly that’s been driving me up the wall (we’re talking on to the roof) for what feels like weeks. Never mind that it’s winter and that flies should not be allowed at this time of year, the little git has been buzzing about for ages, regardless of my attempts to swat him. Grrr although, on a lighter note, at least it’s kept the neighbours entertained; one of their windows looks into my kitchen and they must seriously have wondered what I was doing as I wandered round making wild swipes with a tea towel at 11pm the other night 🙂

*I’d like to mention at this point that I’m always kind to small animals (and old people) and that no insects were hurt during the writing of this post. Although not for lack of trying… *

Anyway, back to this!

I know you’re not supposed to blow your own trumpet but seriously… I had some of this for breakfast today, toasted and spread with a mixture of chocolate peanut butter and strawberry jam. And I don’t think I’ve ever tasted anything that good. Ever. The only problem now is, I need to buy more bananas because I’m going to be getting through a LOT of this!

Have a great week.